Michael Chong and John Williamson: Ottawa’s pandemic response plan requires ongoing public scrutiny to ensure that government is doing the best job it can. That can only happen if Parliament is playing its essential, constitutional role. 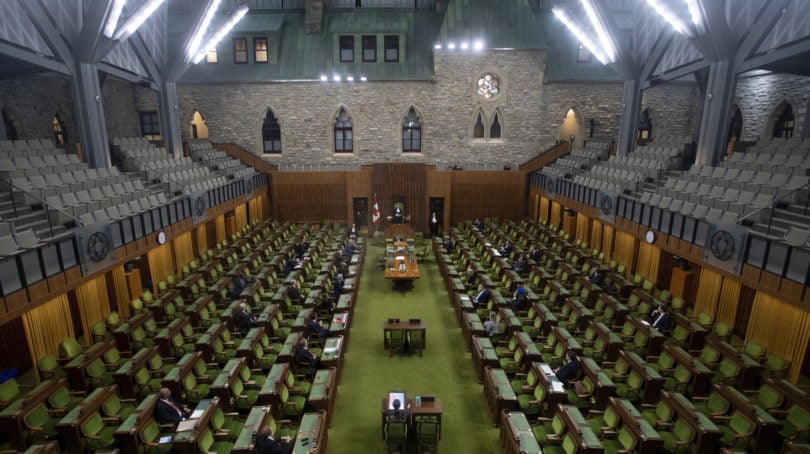 To sit or not to sit? This is the questions parliamentarians are asking with Canada facing a twin shock unprecedented for our generation—a simultaneous pandemic and economic crisis. In response to these shocks, the Trudeau government is dramatically ramping up spending and aid programs to help working families and struggling businesses.

Some say we cannot sit and risk spreading COVID-19, yet hundreds of thousands of Canadians are working daily to keep essential services operating. Parliament must also do its part to pass the government’s essential wage subsidy bill. The proposed assistance will not get out the door if it isn’t sanctioned by the House of Commons and Senate. Others suggest establishing a virtual Parliament. But we lack both the technological ability to run Parliament from afar, and our rules, which can only be changed with a sitting, don’t permit it. And others want a blitz session to pass the wage subsidy bill and whatever else the government wants. Yet this would mean Members of Parliament fulfilling only half their twin-responsibilities—approving government spending but neglecting to seek answers on program design and delivery.

What matters most to Canadians is not the billions of dollars spent, but a successful delivery of Ottawa’s relief package. As such, Parliament, with appropriate social distancing measures, should continue to sit throughout the duration of the coronavirus pandemic.

No political party has a monopoly on good ideas. Evidence and experience say the best public policy outcomes are realized by testing and scrutinizing proposals up front, not weeks or months from now. It’s no exaggeration to say every aid program the Liberals announced has subsequently been improved with direct input from Conservative, NDP, Green and Bloc MPs. And when the federal government overreached, it was opposition MPs that corrected its course.

Several weeks ago, the federal government gave notice it needed Parliament to pass emergency legislation, allowing the implementation of sweeping measures to respond to the pandemic and to assist millions of Canadians who have lost their livelihoods. MPs of all parties responded by signalling their readiness to work collaboratively and get the job done.

When the House of Commons met with some 30 MPs (a tenth the usual number for social distancing purposes), the objective was to rapidly approve emergency legislation (Bill C-13) to implement the government’s previously announced aid for Canadians. It would be large, it would allow the government to act, and it would have accountability oversight from Canada’s elected representatives. With lives in danger and the economy in deep trouble, politics as usual was shelved.

In response, opposition MPs said, “no.” The government was told to get back to the drawing board. After hours of negotiation, the government relented, removing the offending parts of the legislation, and Parliament passed a better law.

So, what happened within those frantic 18 hours? Minutes after its noon opening on Mar. 24, Liberals quickly moved to suspend the House of Commons realizing they didn’t have the votes to proceed. For the legislation to pass in one sitting, the House of Commons needed the unanimous consent of MPs present to suspend its usual procedures. That meant every lawmaker had significant input on the government’s final relief package.

Government and opposition leaders dug in to negotiate wording; entire sections of the government bill were dropped. At the same time, Conservative MPs were outlining their bottom line in texts, emails or in hallway conversations to our parliamentary leadership. When MPs were finally summoned backed to the House of Commons at 3 a.m. on Mar. 25, the Liberal government had come to its senses, backed down, and tabled a radically amended bill.

On taxes, opposition MPs preserved Parliament’s privilege over taxation and removed the government’s ability to raise taxes without parliamentary approval. But this reversal was only the opening act. MPs also affirmed parliamentary oversight of new spending by curtailing the government push for unlimited spending powers. Instead of unlimited spending power to the end of 2021, the government will now have the power to spend on measures related to the pandemic and economic fallout until the end of September.

In addition, any spending under these measures will be scrutinized by the public accounts, finance committees and the Auditor General. The finance committee also gains the ability to recall the Commons within 48 hours if anything egregious is found. And the health committee with be meeting regularly to scrutinize the government’s activities with respect to COVID-19.

Opposition MPs also were able to get measures included in the legislation to clarify the purpose of the government’s spending. The government wanted a blank cheque. Instead, it was forced to spell out what it needed.  The government wanted unlimited powers to the end of 2021. Oppositions MPs refused and put a sunset clause on every new government power under this bill. They will expire on September 30, 2020.

So, all in all a good day. The government’s massively improved bill finally won approval from MPs 18 hours after the House of Commons began sitting. The government was given the tools to act quickly and its aid relief package passed on division, meaning MPs allowed the legislation to pass quickly but with dissent from the Conservative bench.

The emergency legislation, Bill C-13, is not perfect. Despite many improvements, the federal government still has extraordinary spending power until the end of September. The first bit of evidence surfaced within hours of Bill C-13 passing. Initially, the government had announced $82-billion in economic measures, yet within hours of the bill’s passage, the Prime Minister added another $25 billion, bringing the government’s total package to $107 billion. This amount is increasing daily and parliamentary review is needed. Today’s blockbuster deficit spending in response to the pandemic could mean higher taxes, added debt-interest payments and less spending capacity in the future. New spending must achieve its objectives with as little waste as possible.

Perhaps more worrisome is the provision in Bill C-13 that allows a minister to bypass Parliament and change a law—the Employment Insurance Act—by ministerial order. This is deeply worrying. It also opens the door to the introduction of a permanent guaranteed annual income without any scrutiny from Parliament or endorsement from Canadian voters in a general election. Given the urgent need to help Canadians quickly, it’s a risk the country will accept, for now. These are challenges MPs need to resolve when the pandemic has passed.

Parliament still has more work to do. Ottawa’s pandemic response and relief plan requires ongoing public scrutiny, to ensure accountability and to ensure that government is doing the best job it can. That can only happen if Parliament is playing its essential, constitutional role.

For the government to do a better job—to save lives and livelihoods—the opposition must be able to hold it accountable. Parliament must remain open.

Michael Chong and John Williamson are Conservative Members of Parliament for Wellington—Halton Hills and New Brunswick Southwest, respectively. Mr. Chong is the opposition democratic institutions critic and Mr. Williamson is the labour critic.